Golden, Colorado is just over an hour away from Fort Collins and is a hidden gem nestled between the suburbs of Denver and the Rocky Mountains. Named the “Golden City” after miners discovered gold in the river in the 19th century, you will find that the town is still filled with rich history, yet has a modern twist. It is home to the brewery of one of Colorado’s most famous beverages, Coors beer. In addition, it is surrounded by the beautiful foothills that are home to Lookout Mountain and the world famous Red Rocks Park and Amphitheater. 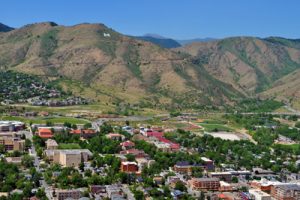 The Coors Brewery Tour is one unlike any other. This is a must do during your time in Golden, Colorado. The Coors Tour is the largest single-site brewery in the world. This 30-minute tour takes you through the same brewery that was founded by Adolph Coors in 1873. The tour takes you through the entire beer making process including the malting, brewing and packaging processes. The tour ends with free samples of the beer and opportunities to enter raffles with your own personal “Golden” ticket! The best part about the tour is that it is completely FREE! You must pick up a free tour ticket from the 13th & Ford parking lot. The tour then begins at this location and takes you through Golden by bus to the brewery.  Since the tour is free, there may be some wait time, unfortunately, so make sure to plan accordingly!

Hours of Operation: The tours run Thursday through Monday from 10 a.m. to 4 p.m., and Sunday from noon to 4 p.m. There are no tours running Tuesday or Wednesday.

Backpacks and large items such as strollers and book bags are not allowed on the tour but checking of these items is available to guests. Coors TAKES RESERVATIONS for large groups (typically 15+) so call ahead for large groups to avoid wait times!

While you are visiting Golden, you can’t help but notice the mountain face to the West that features a giant “M” on the front of it. If you didn’t know already, Golden is home to the School of Mines, a small but world-renowned engineering school. This mountain is called Lookout Mountain and is a great activity for a beautiful Spring day. As you drive up Lookout Mountain Road, towards the “M” at the top, you will be lead around winding roads on the edge of the mountain that gain elevation very quickly. As you drive up, you will see beautiful views of the Golden Valley and Coors off in the distance. As you near the top, there are plenty of places to pull off and enjoy the view. Both sides have great views but you will find that the view on the backside of lookout mountain, is the one worth making the trek.

At the very top of Lookout Mountain, you will find the gravesite of “Buffalo Bill”. In addition, there is a restaurant and

museum to accompany the grave in order to preserve his memory. Here you will find a large parking lot and several lookout points of both sides with giant telescopes to help you explore.

While you’re at the top feel free to head into the Buffalo Bill Cafe and grab a quick snack and a cup of coffee for the road as you head back down the winding roads and back into the bustling small town of Golden.

If you want to go to a concert at one of the best venues in the country, Red Rocks is the place for you. The rocks surrounding the stage creating a natural acoustic sound that is unlike anywhere else. While many concert venues will try to create great acoustics, Red Rocks has it all on its own. You could be in the very back row and have the same experience as someone much closer. As you are standing during the concert you can look out at a great view of southern Denver and some suburbs.

If there aren’t any concerts when you will be in Golden, Red Rocks is an awesome place to just visit. It is free and offers great views and a unique experience. If you are looking for a work out while visiting Golden, Red Rocks is a great place to workout. You can go on your own and run the stairs or you can participate in organized activities, like Yoga on the Rocks. Red Rocks is at 6,400 feet, which can add intensity to your workout. If you want to see a movie like never before, you could attend Film on The Rocks. Film on the Rocks is put on by the Denver Film Society and Denver Arts and Venues. For $15 you get general admission for a concert followed by a movie.

The movie schedule can be found at: www.film.redrocksonline.com/fotr

Yoga on the Rocks Information: http://yoga.redrocksonline.com/yotr

Bob’s Atomic Burgers is quaint, family-oriented burger joint that serves some of the best food in Colorado. They pride themselves on providing the freshest, high quality food and service they can for a reasonable price. Bob’s is located right across the street from the Coors Brewery in Golden, making a great place to grab lunch after a brewery tour!

While they are most well known for their burgers, Bob’s Atomic Burgers serves a variety of meals including grilled and fried chicken sandwiches, quinoa burgers, and hot dogs. Each meal is set up in a “build-it-yourself” fashion where you can choose which toppings you want to add. They offer gluten-free buns for those with a gluten sensitivity or allergy.

Pair your sandwich with an order of french fries or onion strings and top it off with a milkshake or malt to make your meal complete!

If you are exploring the streets of downtown Golden and start to get hungry, make sure you stop by the critically acclaimed local favorite, D-Deli. D-Deli has been around and popular since 2000 when a Dutch couple created the deli, and their Dutch accents pronouncing the phrase “the deli” as “d’deli”. This is where the deli’s name comes from. D-Deli is located in the heart of Golden and is a small “hole-in-the-wall” style sandwich shop with an extensive menu. This old-fashioned deli offers over 120 locally grown and sourced ingredients used in all sandwiches.

Make sure you take the time to explore their menu when you’re there. They have your typical deli subs, but they also get very creative with some of their selections. So if you are feeling brave check out one of their “Wild Side” sandwiches.

The deli is located at 1207 Washington Ave, in Golden, CO.

Woody’s pizza is a local Golden, Colorado staple established in 1993. They are located right in the heart of downtown at 1305 Washington Avenue, in Golden CO. Woody’s is located exactly 1 block west of the Coors Brewery parking lot, making it the perfect stop for lunch or dinner! They are known for their famous pizza, featuring their semolina-and-honey crust, beer & a salad-bar buffet They have all you can eat pizza, with access to all their famous classics in the window, ready for you to take a slice and try them all! Woody’s offers all you can eat pizza, soup, and salad for $12.99 every day! As far as appetizers go, Woody’s is very well known for their famous beer cheese soup, and is a perfect start to your meal! It’s a great location to come on a sports-filled day, to enjoy some amazing food and keep up to date on what’s happening in the sports world through their 16 TVs.

Woody’s has many popular deals, but one of the most popular is their “solar-powered happy-hour” which is available daily Monday-Friday from 3-6pm. Woody’s also has a full-service bar available featuring 14 local Colorado beers.

Link to the menu: http://www.woodysgolden.com/

Most Instagrammable Spots in Fort Collins

Get Out of FOCO: A Day Trip to Denver, CO